A unique sterling silver pendant featuring a square, checkerboard-faceted labradorite, an Australian opal cabochon, and a teardrop faceted blue topaz gemstone with an ornate bail. Talk about a statement piece!

Need a chain? We have several to choose from here.

Labradorite is a type of plagioclase feldspar displaying a unique phenomenon aptly named labradorescence. This is caused by the interference of light within the layers of the stone. Colors show through in lustrous metallic tints, most often blue and gold, although specimens with a complete spectrum of colors are most sought after. Labradorite derives its name from where it was first found on the peninsula of Labrador, Canada. Metaphysically, labradorite is believed to help facilitate life transitions.  Deposits are found in Canada, Madagascar, and Finland.

Topaz occurs in a variety of colors, the most well-known being imperial (golden-yellow sherry) topaz, blue topaz and pink topaz. Blue topaz can occur naturally but is typically pale. Natural pink stones are rare, though yellow topaz from Brazil turns pink when heated. Topaz sheds light on “the path,” enabling one to “be” rather than “do.” Notable localities for gem-quality topaz include Brazil, Russia, Nigeria, Scotland, Sri Lanka, Pakistan, Mexico, Colorado, Texas and California.

Portland Rock Stars, today and tomorrow is your ch

This Black Friday and Cyber Monday, we'll be givin

You asked for it and so we're giving it away! You

Check out these gorgeous moss agate pendants we ju 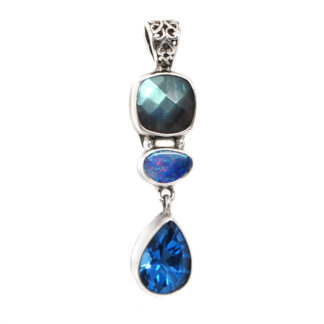