Build your own DIY healing stone pouch!  Select each individual tumbled stone and add it to your cart for a personalized selection of your favorite healing stones.

Each stone varies in size and shape but all are approximately 3/4″ to 1″.

Each Sold Separately, photo is sample.

Want a velvet pouch to keep your tumbled stones in? Check out our pouch options here.

One of the many members of the quartz family, amethyst gets its beautiful purple hue due to traces of iron. Deriving its name from the ancient Greek amethustos, amethyst literally translates as “not drunk” and was once believed to protect one against drunkenness. Many religions around the world have at one time or still do consider amethyst helpful in bringing one to a higher spiritual state and thus closer to god. Amethyst today is still used for spirituality and is considered the #1 addiction recovery stone. Amethyst is found in abundance in Brazil, Africa, Uruguay, Mexico, Canada, and the U.S.A.

Commonly mistaken for jade, aventurine is actually a member of the quartz family. It gets its glittery appearance from inclusions of fuchsite (green mica). Aventurine adopted its name from a similar looking Italian glass (a ventura) in the early 1700’s. With a Mohs hardness of 7, the beautiful green stone is well suited for carving and jewelry making. Metaphysically, aventurine is believed to bring love, joy, and prosperity. Aventurine is most commonly found in Brazil, India, Austria, and Russia.

Carnelian is a reddish-orange to reddish-brown translucent variety of chalcedony, which is a type of agate. Iron-oxides give it color, and it can be uniformly colored or banded. Its name comes from its resemblance to cornel cherries. Used decoratively since at least 4000 BCE, carnelian is a stone of importance in Muslim, Jewish, and Christian traditions. Fine carnelian is found in Oregon, Washington, Brazil, and India. Metaphysically, carnelian is used for creativity, renewal, and reproduction.

One of the many members of the quartz family, citrine, like amethyst, gets its striking yellow hue from traces of iron. It derives its name from its lemon-yellow color. Natural citrines are usually a pale yellow, and most commercial citrines are actually heat-treated amethyst or smoky quartz. Metaphysically, citrine is known as the “merchant’s stone” or “money stone,” and is said to bring prosperity. Deposits are found in Brazil, Madagascar, USA, and the Democratic Republic of Congo.

Dalmatian Stone is a grey-white to cream-colored material with black spots found in Chihuahua, Mexico. Its name comes from its resemblance to the Dalmatian breed of dogs from the Dalmatia region of Croatia. Although sometimes called “Dalmatian Jasper,” it is not a jasper but an igneous rock. The light-colored material is a mixture of mostly albite with a little quartz, and the black material is arfvedsonite. Metaphysically, Dalmatian Stone encourages grounding and supports family and loyalty.

Howlite, a calcium borosilicate hydroxide, was discovered in 1868 by Canadian chemist Henry How. Crystals rarely form. Typically it is found in nodular masses, often veined in black with other minerals. Howlite helps relax the overactive mind and opens the mind to wisdom and insight, helping to formulate and achieve goals.  It teaches patience and helps overcome tendencies towards being overly critical and selfishness. Howlite is found in Zimbabwe, Canada, Mexico, Turkey and California.

Labradorite is a type of plagioclase feldspar displaying a unique phenomenon aptly named labradorescence. This is caused by the interference of light within the layers of the stone. Colors show through in lustrous metallic tints, most often blue and gold, although specimens with a complete spectrum of colors are most sought after. Labradorite derives its name from where it was first found on the peninsula of Labrador, Canada. Metaphysically, labradorite is believed to help facilitate life transitions.  Deposits are found in Canada, Madagascar, and Finland.

Moonstone is a gem variety of orthoclase feldspar, a potassium aluminum silicate. It exhibits a phenomenon known as adularescence, seen as a billowy light on the surface of the stone. “Rainbow Moonstone” is actually plagioclase feldspar and is considered to be a colorless labradorite. It’s blue, or multi colored, flash is called labradorescence and is caused by the minerals lamellar structure. High quality moonstone can be found in India, Sri Lanka, and Myanmar. Metaphysically, moonstone is used for balancing cycles and protection while traveling.

Agate has the same chemical composition as quartz but instead of forming whole crystals, it has a microcrystalline structure. To be a true “agate”, the stone must exhibit a pattern or banding, otherwise it is considered chalcedony. Different varieties of agate include moss, tree, and lace. Much agate comes from Brazil where it is often dyed vibrant colors. Other sources for beautiful agates include Oregon, Mexico, Botswana, and South Africa. Metaphysically, agate helps with emotional, physical, and intellectual balance.

Onyx is a semi-precious variety of agate distinguished by parallel bands of black and white chalcedony, as opposed to the more chaotic banding of other agates. Black onyx is the most popular variety but is not as common as that with banding, such as sardonyx. Most carved and polished “onyx” is actually banded calcite from Mexico or Pakistan. From the Greek onux, meaning “nail,” this stone was widely used by ancient Greeks and Romans. Onyx is thought to increase regeneration, happiness, and intuition. Onyx is mined in Brazil, India, California and Uruguay.

Opalite, sometimes called “Sea Opal” or “Opalized Fluorite,” is a human-made glass produced in China. Ranging in color from clear to milky white, this synthetic glass makes a nice opal look-a-like. Opalite is considered a Third Eye Chakra stone. Metaphysically, glass is considered to be protective.

Rose quartz is the translucent to transparent pink variety of crystalline quartz. Commonly found as a massive aggregate, it is rarely found as crystals. Its coloration has been attributed to traces of titanium, while its milky appearance may be due to inclusions of rutile, which can also give asterism (a star shaped figure) to the stone. Metaphysically, rose quartz is the stone of unconditional love and is used for emotional healing. Rose quartz can be found in the USA, Brazil, Madagascar, and Sweden.

Named for its high sodium content, sodalite is a rich royal blue mineral, a sodium aluminum silicate chloride. Crystals are extremely rare and it is mostly found as massive aggregates. Sodalite is primarily used as an ornamental gemstone. Metaphysically, it brings harmony into one’s life. Sodalite is found in the USA, Russia, Brazil, and Canada

A variety of quartz, Tiger Eye exhibits classic chatoyancy, a vertical luminescent band like a cat’s eye. It is formed when parallel veins of crocidolite (blue asbestos) fibers are first altered to iron oxides and then replaced by silica. Hawk’s Eye is similar to Tiger Eye except the crocidolite is not altered by iron oxides and retains its original blue color. A major source of tiger eye is Griquatown West, South Africa. In Australia, it combines with red jasper and hematite and is called Tiger Iron. Metaphysically, Tiger Eye is used for insight and protection.

Black Tourmaline is great for protection of all ki

Intuition is that gut feeling when you know someth

This Wear it Wednesday I’m showing off some of o 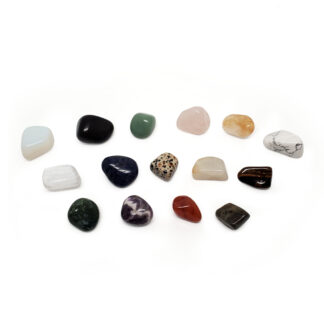